2016 was the first time that this event has taken place, on the 75th anniversary of the first crossing and here are a couple of reports from two of those who took part.  Apart from the photos included in the reports there is a further  much more comprehensive ‘album’ available at:
https://goo.gl/photos/3eZEPadiLKduwnPf6

The majority of the photos were taken by Kim Del Vecchio and we are grateful to her for allowing us to use them.  As you can see the trail was not all work and they did manage to squeeze in a visit or two to a ‘winery’ or restaurant! 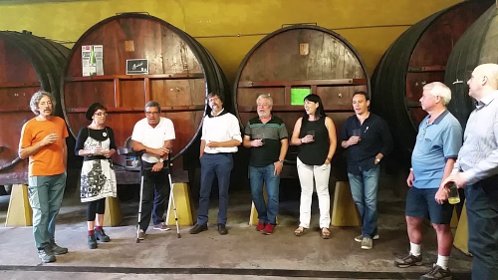 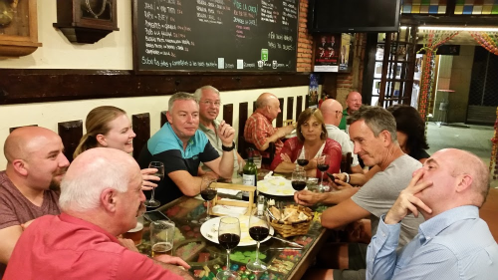 The BFTA Trail 2016 by John Morgan

In August 1941, Andree De Jongh walked into the British consulate in Bilbao after completing her first successful crossing of the Basque Pyrenees. It was a blueprint for what would arguably become one of the most successful Allied Escape networks during World War Two, the Comet Line. 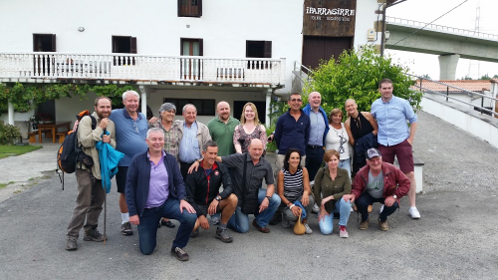 On the 19/20 August 2016, a group of people from the Spanish Basque Country and abroad took part in an event to commemorate that first crossing in 1941. The event comprised a day hike and a night hike of the coastal route, with both local and international walkers; and a series of commemorative events in Irun, Oiartzun, Renteria, Hernani and San Sebastian in which the family members of local people, who had participated in escape line resistance, took part.

The event, which was an official item on the San Sebastian European City of Culture 2016 programme, was organised by the Basque/Bidasoa Freedom Trails Association (BFTA) which commemorates escape line activities throughout the Basque country during WW2. 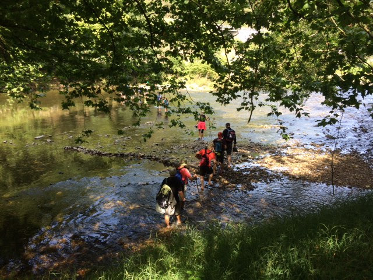 During WW2, the Basque Pyrenees/river Bidasoa frontier zone was a key link in the clandestine escape lines to escape Nazi-occupied Europe. Many of the safe houses were located in the Basque Country and the mountain guides (mugalaris) hailed from this area, the city of San Sebastián being an important logistics point within the networks.

During the day hike on 19 August, the walkers paid tribute at the site of the permanent memorials to Comte Antoine d’Ursel and Lt. James F. Burch which overlook the Bidasoa river. In Irun, a tribute was paid to Maritxu Anatol who was responsible for helping escapees and evaders to cross the Pyrenees, providing food and clothes to downed airmen, organising rendezvous and finding accommodation, and so on. Maritxu spent time in the Gestapo HQ in Bayonne and in Biarritz prison. Finally, the group stopped at Sarobe farm to pay tribute to the Iriarte family. 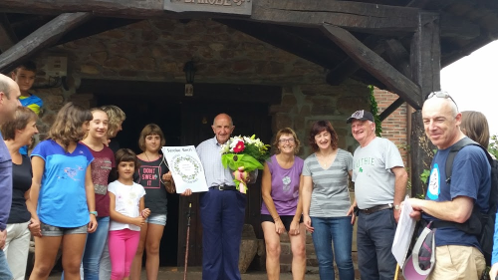 On the morning of 20 August 2016, we visited the Altzibar neighbourhood of Oiartzun to pay a tribute to María Garayar and Pedro Arbide. We then journeyed to the town of Rentería to pay tribute to María Arbide and Ignacio Urbieta.

Taking a local train from Lezo to the Gros neighbourhood of San Sebastián (75 years ago it was a tram) we paid a tribute at the home of Bernardo Aracama, who organized the logistics for the escape routes during WWII, which was attended by members of the Aracama family. 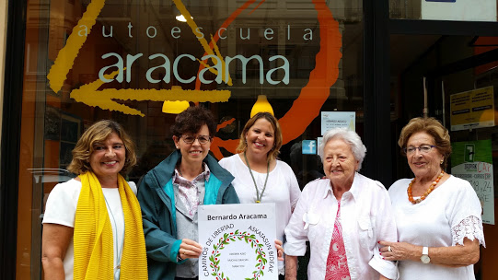 The event was addressed by Miren Azkarate, ex-Arts Minister in the Basque Government and currently Arts-Culture councillor on San Sebastian City Council.

Finally, in Hernani, we commemorated four local guides, Florentino Goikoetxea, Tomas Anabitarte, Juan Manuel Larburu and Martin Errazkin. The event, which was well attended by people from the area, included singing by the local choir and an address by a representative of the local authority. 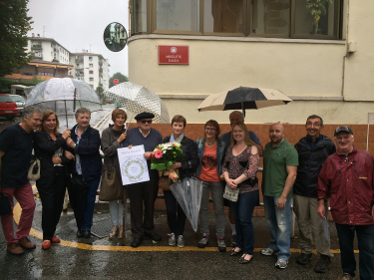 BFTA hopes to organise further events in the future to celebrate other groups and individuals who participated in escape line resistance in the Basque Country, including, for example, the Schepens/Sarotxar line which operated between the area around Mendive and Otxagabia/Orbaizeta in Navarre.

Anyone who is interested in future events should register their interest with BFTA by email to:  askatasunbideak@gmail.com

The BFTA Trail 2016 by Joe Linehan

We were too busy negotiating hills, crossing the border river, etc. to take many pictures and, after 7-8 hours through mucky weather – rain and mist -, we were too knackered to think of the photo album! As John Morgan says, 75 years ago the fugitives/guides weren’t aware that they were making history or historical memory!

The guides (the Basque Manolo, and myself) were not at all happy with the bad weather, having carefully chosen the date, apart from the historical importance thereof, because there was a full moon that night (there wasn’t!) and it was a period statistically dry (it wasn’t!).

What was amazing for the guides was the resilience and high spirits of the contingent of walkers (from Britain, Ireland and the USA), who were very happy with what was achieved, despite the rain and its consequent discomfort and the poor visibility due to the mist, on top of the difficulty of the trail in itself, and walking at night!

I guess the local guides see it in a different way – they can hike any day of the year (not usually at night, though) and opt not to walk in bad weather – whereas, for the international walkers, coming from afar (like the escapers/evaders 75 years ago), there was no choice – come what may, “in fair weather or foul”, it had to be done. I believe this is why the participants are proud of their achievement, and quite rightly so.

Would Florentino Goikoetxea have postponed the escape in those conditions? Who knows? It depended on so many other factors – deployment of guards both sides of the frontier, availability of guides and, importantly, the longer the escapees/evaders were holed up in a safe house such as Bidegain Berri in the French Basque Country, waiting for the signal to go, the more likely they would have betrayed and captured by the Gestapo.

BFTA, the Bidasoa Basque Pyrenees (see our Facebook page) Freedom Trails Association is considering a similar, organised night walk for 2018  and organisations such as ELMS, Les Amis and Comete Remembrance will be notified and invited. Of course, in the meantime anybody is free to organise their own walk but, while I am prepared to help and give advice (if I am here), there is no guarantee of availability of guides and, moreover, logistics and accommodation would have to be organised by the walkers themselves.

Finally, the Hernani Mountaineering Club, Mendiriz Mendi (info@mendirizmendi.com), at the behest of BFTA, is to do a first time Schepens-Sarotxar Freedom (day) Trail from Mendive in the French Basque country to Orbaizeta in the Spanish country in October 2017 (viz. The Surgeon and the Shepherd by meg Ostrum, ISBN 978-0-8032-3641-7). John Morgan has been invited as a representative of ELMS, John recced the route with me last March and made contact with local people and with Meg Ostrum, and I recced the Spanish side again last month. The hike will serve as a basis to invite an international group (invitations to the above-mentioned organisations) at a later date, possibly 2018 and to be confirmed).