The Museum for Le Chemin de la Liberte was inaugurated in 2007 and is situated on the D117 road leading into St Girons from the north and built on the town’s former railway station. On the ground floor there is a very impressive permanent exhibition covering all aspects of escape and evasion. The display includes full details of the networks involved, the guides and passeurs who ran them, crossing points, routes taken, hiding places and internment camps in Spain. There are personal eye-witness accounts and photographs of fleeing fugitives and Jews, evading army cadets, local martyrs and heroes, and shot-down Allied airmen. Memorial sites and monuments are listed and shown. Upstairs there is a library and archive where one can consult a variety of books, documents, and wartime archive. Wartime exhibitions also take place linked to the area’s wartime activities. The museum is open to the public from Monday to Friday 1400hrs to 1630hrs. www.chemindelaliberte.com

The Route – The route was inaugurated as a memorial route in 1994 to commemorate the safe-house keepers, couriers, and mountain guides of the area who assisted Allied escapers and evaders and other fugitives to escape from occupied Europe and to continue on their way to London or North Africa. The route is symbolic of the many routes across the high Pyrenees including the Pat O’Leary and the Dutch-Paris Lines, and although it is the longest and most difficult of all, it was the one most used by local passeurs. Occupying troops were often unwilling to maintain the required surveillance because of the difficult terrain and the hostile weather conditions.  Many walkers retrace this route each year, some of who are related to evaders who crossed over during WW2. The organisation is administered by The Freedom Trail Association, based in St Girons; they can be contacted through www.chemindelaliberte.com It is necessary to warn all intending participants that they must be physically fit, well equipped and well trained on mountain routes before attempting this trail. Although the scenery of the high Pyrenees is fantastic, walkers may also experience variable, and possibly hostile, weather conditions together with high altitudes. You will be required to carry all your own kit and equipment for this trail.  For further information on the trail an historical guide-book is available, written by Scott Goodall who was one of the ‘originals’ who has made the trail event what it is today.

Start point is at the bridge over the River Salat at the southern entrance to the town. The original bridge was a main contact point for evaders and their couriers/guides. From the bridge the route passes through housing which leads to a woodland path that takes the walker above the villages of Eycheil, Lacourt, and Alos. The walk continues to the Col de Artique at 880m. Walkers stop at the memorial in memory of 19 year-old Louis Barrau, a passeur who was betrayed, then captured and executed by the Germans. The trail then descends to the Col d’Escots at 725m and climbs again to the hamlet of Aunac 766m, which is the end of day one.

The walk now changes from the ‘moderate’ walk of Day One to more serious walking. The route is followed to the gite d’etape at Esbints, then continues steeply to the Col de la Core (1395m). Next, a descent to the road, for approx 330m, until a track leading to the Cabane de Casabede is reached. Onwards to the Col de Soularil (1579m), then a gradual descent to the Cabane de Subera (1499m), which is ‘home’ for the night. Walkers pitch tents and await the arrival of a second group of French walkers. 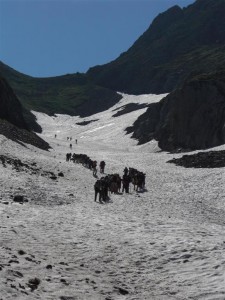 The climb now becomes much steeper and more difficult. After two hours, walkers arrive at the wreckage of a Halifax Bomber that crashed on 19th July 1945. A plaque has been placed near to the wreckage in memory of the seven crew-members.  Following a short ceremony, the climb continues over the Col de Craberous (2382m), and then descends to the Cabane d’Espugue (2110m). After passing the L’Etang de Cruzous, there is a steep climb to the Col de Pecouch (2494m). This is followed by a decent to the Refuge de Estagnous (2245m), where the day’s walk ends.

From the refuge (used by evaders during WW2), the route descends to the l’Etang Rond (1929m), then climbs very steeply up to the I’Etang Long (2125m). The Spanish frontier is reached after a further climb to the Col de Claouere (2500m). This is followed by a steep descent into Spain to reach the River Noguera Pallaresa where a track winds along the valley to the village of Alos d’Isil (1200m), and the end of this very difficult route. Within walking distance is the village of Esterri de Aneu, not far from the prison in Sort, which for so many was their final destination.

Many walks take place throughout the year, but the commemorative event is always in July.

Please Note: The Chemin de la Liberte is over very rugged terrain rising to over 2500m and can be subject to severe weather conditions. The WW2 Escape Lines Memorial Society is not, and cannot be held, responsible for decisions (and any resulting consequences) taken by the guides who lead and organise this event.