Much of Norway is inside the Arctic Circle, the nights are very long and inland temperatures often lower than –40C; for much of the time it is dark. Therefore escapers and evaders in Norway found their challenge was more often a case of survival rather than evasion and for them the total darkness could be both an asset and a liability. 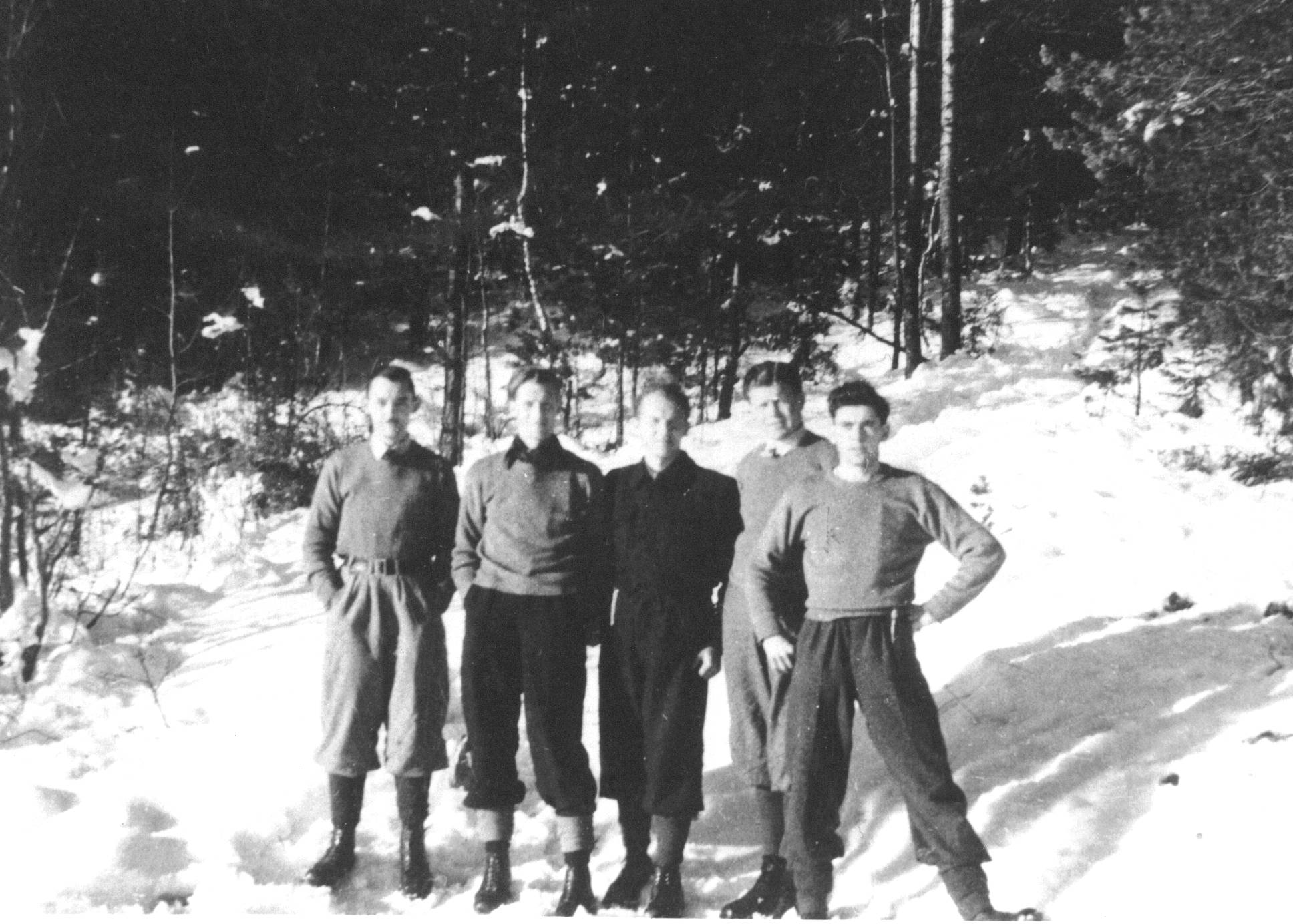 Evaders Bolton, Dalton, Chapin and Hicks with a Norwegian helper [centre]. On a supply drop to a Mil Org group in the Telemark region the Crew’s Stirling iced-up and crashed. The surviving crew reached Sweden by an overland route.

The main escape routes from Norway were to the East, into Sweden, or to the West towards the coastal areas of the North Sea. In the South East, from 1942 onwards, Oslo became the focal point for many of the organised escape lines; some 50,000 fugitives, mostly civilians, reached freedom via Sweden.

The Norwegian population lived mainly in the large towns and cities and in the numerous small fishing villages situated along more than 1000 miles of the rugged coastline. In the hinterland there were isolated farms and farming communes but many of these were unoccupied during the harsh winter period. Often, isolated farms in the mountains had links to the Norwegian Resistance [MIL ORG] that came to the rescue of many of the evaders.

Whichever route to Sweden was chosen, and dependent upon how far north the evader was or the time of year, the weather was generally extremely hostile. The only alternative to walking in the snow or ski-marching was to hitch a lift on the ‘Shetland Bus’. This could only be arranged with Mil Org working in conjunction with SOE in London – MI9 had no fixed routes in Norway. When evaders made contact with the Resistance they in turn informed SOE, who in their turn informed London by radio.

SOE ran its own ‘delivery service’ of arms, ammunition and agents using a fleet of small fishing boats that went by the collective name of the ‘Shetland Bus’. It operated from its base on the Shetland Islands and on the return journey to Shetland the ‘bus’ took back agents and other fugitives, including evaders. The ‘Shetland Bus’ was the most northern of all escape line routes and was an asset of SOE not MI9.

A base was set up at Luna Voe on Shetland and the fishing boats, manned by volunteer fishermen, were covertly armed. The crews often undertook up to three trips a week to the rugged fiords and inlets of the Norwegian coast, where many of the coastal villages supplied safe-houses for evaders and arms and ammunition dumps for the Resistance. The small boats travelled in the dark, winter and no moon periods; the route across this area of the North Sea in winter provided probably the most hostile sea crossing in the world. The hazards included appalling weather – gales, snow, blizzards, and freezing temperatures – and the constant threats from air attack by enemy aircraft and motor gunboats. If attacked by enemy aircraft the boats stood little chance; their only cover was the darkness.

Evaders taking the overland route to Sweden passed through a network of isolated farm-houses and farming communes. Often the farmer or his family would escort the evaders on foot or skis to the next farmhouse in the chain. When farms were not available evaders sought shelter in mountain caves and woodcutters’ huts during the days and walked at night to keep warm; during the summer months the nights were not that dark. Many aircrew suffered badly from foot problems as their flying boots were unsuitable for mountain walking and alternatives were unavailable. 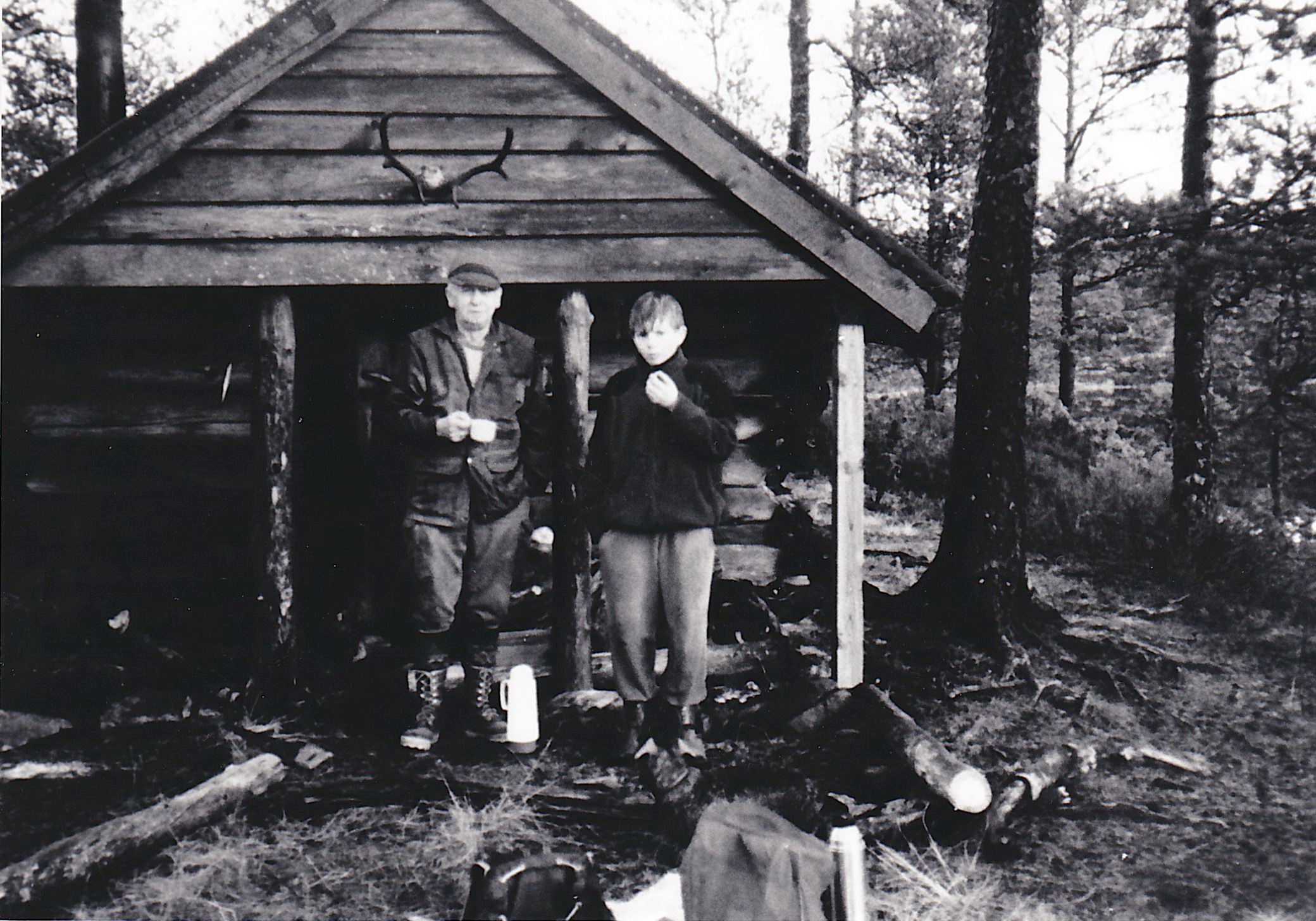 The hut named ‘Little Canada’ built and equipped by Norwegian helper Frederik Ovredal [above] that housed Canadian evaders prior to their rescue by the Shetland Bus.

Many of Bomber Command’s operations over the area were carried out by 6 [Canadian] Group Bomber Command, based in North Yorkshire and at airfields in the North East of England. Their HQ was at Allerton Castle near Knaresborough, a Gothic edifice known to the Canadians as ‘Castle Dismal’, and which now houses a memorial to those members of the Group who lost their lives on Operations during WW2.

With the exception of Commando raiding forces, few land operations took place in Norway. A number of sabotage raids took place in conjunction with the Mil Org and SOE, one of the most daring being the destruction of the hydro-electric power station used to manufacture heavy water, and crucial to the development of an atomic weapon, situated near to the town of Rjukan. The plant was destroyed and the saboteurs were pursued on skis into Sweden by over 3000 German ski troops. It had been considered a ‘suicide mission’, but in the event all the team eventually reached England via Sweden, with the exception of the radio operator Knut Haugland, who returned to the Hardangervidda Plateau for two months to hide before returning to the Resistance as a wireless operator in Oslo. He later returned to London by the Shetland Bus route.

The main organisations that assisted escapers and evaders in Norway were: