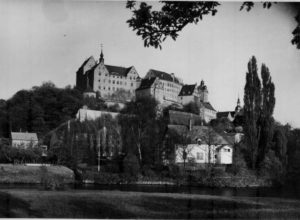 The building of the impressive Colditz Castle began in 1080, by Count Wiprecht von Groitsch. During WW2 the castle’s location, at the centre of a triangle framed by the three great cities of Leipzig, Dresden and Chemitz, placed it at the heart of the German Reich, and over 400 miles deep inside countries under Nazi influence.

The castle is situated on high ground, on the top of a high cliff promontory that juts out over the River Mulde. The walls of the Castle are, on average, seven feet thick and solid rock. The inner courtyard of the Castle is over 250 feet above sea level.

The Germans considered Colditz Castle to be impregnable. In WW2 it was designated as a special category prison for some of the most prolific officer-escapers from POW camps and for others who were deemed ‘deutschfeindlich’ (anti German). It was a German fortress from which escape was unknown. The German garrison that guarded the prison outnumbered the prisoners at all times. 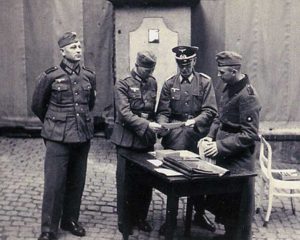 Floodlights covered all areas of the castle at night, despite the blackout, as it was thought that the Allies would not bomb their own servicemen. All windows were barred. Sentries patrolled the dead ground and open spaces around the castle both during the day and at night. Alsatian guard dogs roamed between fences of barbed wire. Should an escaper successfully get out of the castle he then had to reach the lower ground and civilisation; these areas were also patrolled.

Throughout the German POW system, Colditz was known as ‘the bad boys camp’. In fact, to get there an Allied officer had to ‘qualify’. The study was practical, and involved learning to escape from other POW camps; those camps became the ‘prep schools’ for escapers throughout the German occupied territories. If you passed the ‘prep school tests’ you certainly would not be waiting around to take up a place in Colditz, you would had left Germany for good. If you failed those ‘preliminary tests’ on more than one occasion, then there was a good chance of heading for the ‘University of Colditz’, to study escaping in greater depth! 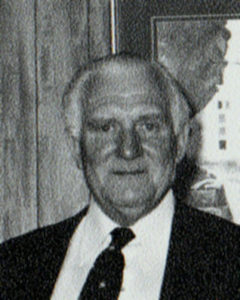 An early group of persistent escapers who were sent to Colditz were Dick Howe, Pat Reid, Rupert Barry, Kenneth Lockward, Harry Elliott and Peter Allen. All had escaped through a tunnel from Oflag VII at Laufen. All were subsequently recaptured and sent to Colditz. Dick Howe became Escape Officer at Colditz, after the escape of Pat Reid who had held the position before him. Airey Neave had escaped 9 months 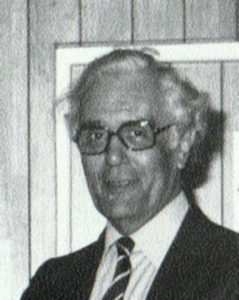 earlier, and Dick made an agreement with the SBO, Col German, that he would only attempt to escape after ten British officers had made ‘home-runs’. Dick controlled all forging and documents for escapers, together with a hidden radio receiver. Another persistent escaper was Bill ‘Lulu’ Lawton. He made two good escapes but was recaptured outside the Castle. Further escape attempts earned him a total of 120 days in solitary confinement on bread and water. When not in solitary Bill assisted Dick on the Escape Committee. Of those officers who did escape from Colditz, a small number were assisted by Escape Lines in France.

The following is a list of escapes from the Castle taken from Pat Reid’s book – ‘Colditz’: