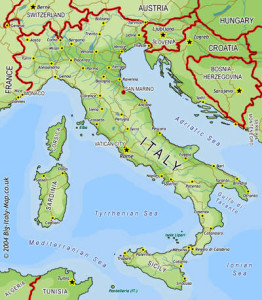 The history of escape in Italy is very different from that of the occupied countries of western Europe.  Italy was, until September  1943 a co-belligerent with Germany and there were over 70 POW camps situated on the Italian peninsula.  However there were few recorded escape attempts prior to 1943, largely because of the difficulties of getting out of Italy.  Surrounded on three sides by the sea, and with the major mountain ranges of the Alps and Dolomites to the north, getting out of Italy posed almost insurmountable problems.  However, following the Italian armistice on the 8th September 1943, thousands of Allied POWs fled from their camps into the countryside,and sought shelter with the local population.  Despite the dangers to themselves and their families, many Italians took in the escapers and provided food and shelter for a considerable period of time. Efforts were made by Allied military organisations to collect and evacuate escapers and a number were taken by ship/submarine to safety in the south. However many escapers stayed in the area, either working as farm labourers or in some cases joining up with groups of local partisans. These servicemen would eventually be ‘picked up’ as the Allied advance pushed slowly northwards. There can be little doubt that many of our fathers would not have survived had it not been for the bravery and humanity of local Italian people, and we owe their descendents a huge debt for what they did. A detailed dscription of events in Italy will follow soon but for now we  want to focus on one particular, area, The Tenna Valley and one particular home, used as a safe house by POWs awaiting evacuation, The Villa Salvadori

Owned by the Salvadori family, who were strongly anti-fascist, between September 1943 and May 1944 the Villa became a safe house for all sorts of POW seeking refuge from the Germans and Italian fascists.  At times the POws were hidden in the attic while German were demanding breakfast in the kitchen.  The Countess was well known for her anti fascist views and as a result was visited frequently by ‘Officials’ checking up on her, and the house!  Several parties of escapers staged through the Villa on their way to pick up  points on the beach near the mouth of the Tenna River, an operation fraught with danger due to the proximity of German troops, frequent bad weather and the difficulty of obtaining a boat to take the evaders out to the waiting vessel!  The evaders who ‘used’ the Villa included five Generals,  and a variety of military and 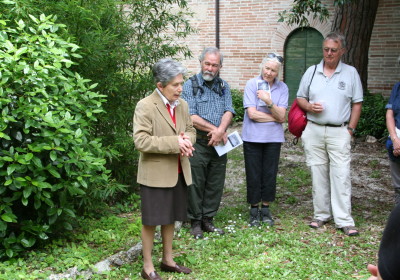 civilians anxious not to be recaptured! The current descendent of the Countess, Clara Muzzarelli has welcomed the visits by members of both ELMS and of The Monte San Martino Trust during our recent Trail events in the Tenna Valley.

For a report on the Tenna Valley Trail of 2013 look here.