It was hard to believe that a full year had passed but here we were again, assembled at the Monkbar Hotel for our annual reunion. 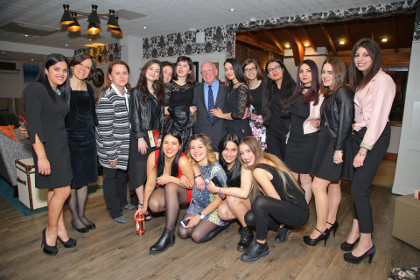 Those attending had been gathering in York since Thursday 27th April, and this included a party of 12 Italian students from the Tenna Valley region, where our annual trail event takes place.  They are all in their last year of secondary education, and all about to take their final exams before moving on to either university or other further training. They had all funded their own trip, as this year we had hoped to have a group of French students from the area of St Hippolyte in southern France, but sadly they were unable to attend.  Next year we hope to have a party of Belgian students.

Sadly the number of veterans attending continues to decline, and there were fewer than ever at this year’s event. 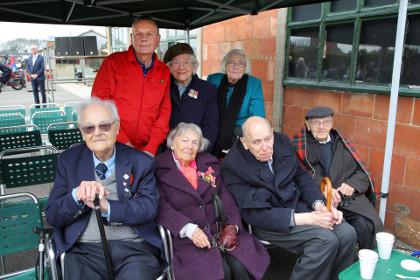 We were delighted to see those who had been able to make it, including ‘Nadine’ who came with friends from Brussels.  Unfortunately the group were involved in a traffic accident en route from the airport to York, but fortunately no one was injured and all were able to enjoy the weekend. 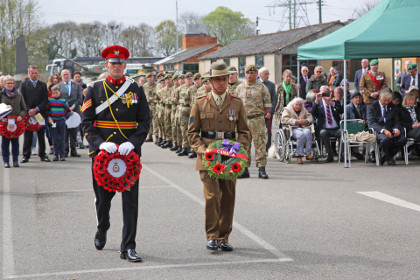 We also welcomed two new representatives from the Defence Services Training Organisation in Cornwall, Sgts  P Gidley and P Rai.  We look forward to seeing them at future events.

Most people arrived in time for a relaxed dinner on Friday evening, which was an ideal opportunity to catch up with old friends.  After dinner we were then treated to a short presentation on the history of Fort St Hippolyte by Donough O’Brien, who actually lives in the area.  It was a fascinating look at a location that had been very important in escape line matters during the war. 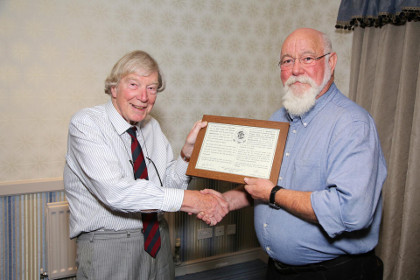 Saturday dawned bright and not too cold, just for a change, and everyone headed off to the The Eden Camp Museum, near Malton for our annual commemorative event. 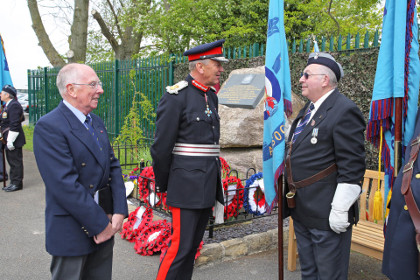 We were delighted to welcome the new Lord Lieutenant of North Yorkshire, Mr Barry Dodd  CBE, who stayed not only for the ceremony but also joined us for lunch afterwards.

We were also pleased to see once again a contingent from the Armed Forces Bikers from the Newcastle area who quite literally ‘roared’ onto the parking area! 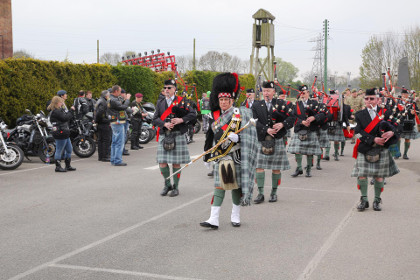 We also enjoyed the music played by the  (now regular attendees) the Sheffield Pipe Band and the Band of the Royal Northumberland Fusiliers (Cadets). 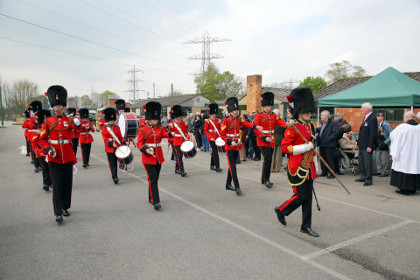 We also welcomed the Revd Canon John Manchester who led the service for the event. John has helped us on previous occasions and the Society would like to express their sincere thanks to the Revd Bruce Lyons who has been the Society’s resident padre for a number of years.  Sadly ill health has made it impossible for Bruce to travel to engagements and we wish him a speedy recovery. 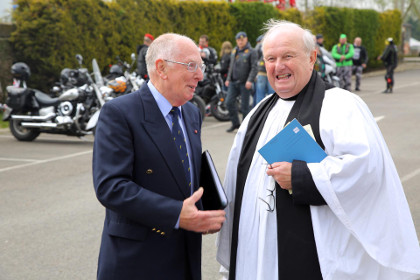 WFor once it stayed dry and relatively warm and following the formal ceremony everyone was summoned for the photo shoot, so ably conducted by our photographer Paul Mellor. 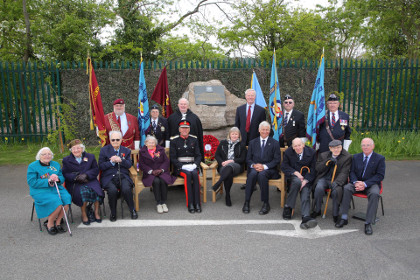 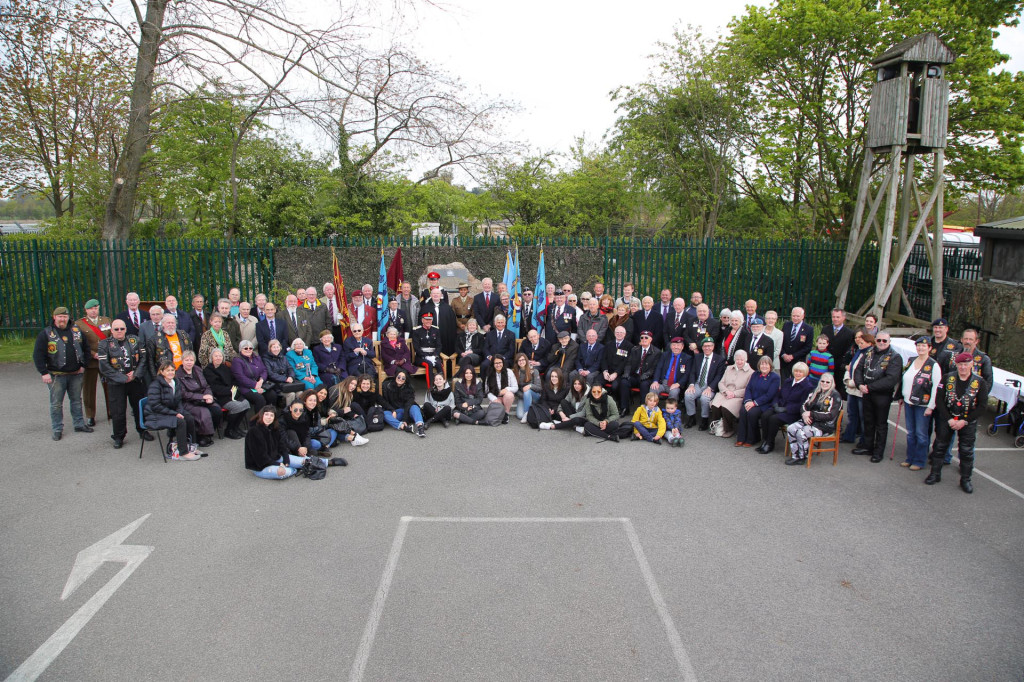 Lunch then beckoned and our thanks to Eden Camp for their generous hospitality.  ELMS members then attended their AGM before returning to York and girding their loins for the annual dinner. 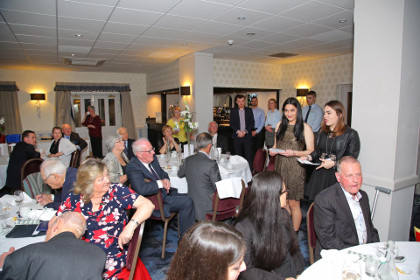 Numbers were lower than last year, almost inevitably so as fewer veterans and therefore their families attended.  The evening ended with a short address by two of the Italian students who spoke quite movingly of what the experience of coming to York meant to them. 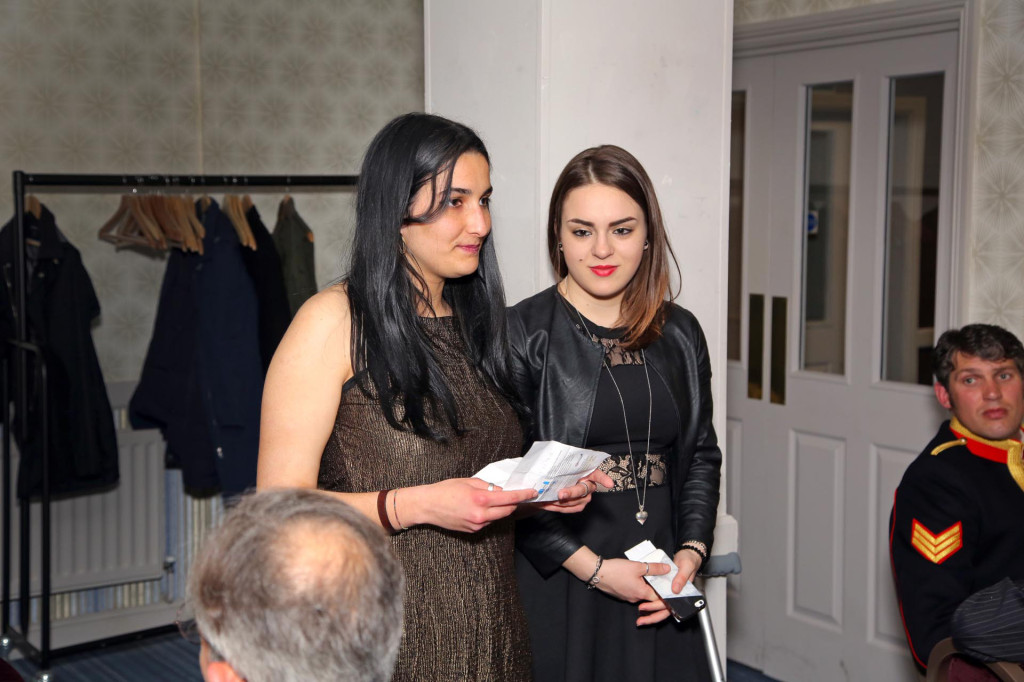 Everyone seemed to have enjoyed themselves and I know that some members did stay up very late!

Breakfast on Sunday was a time for farewells as most people were heading home after the event.  We hope that everyone had a safe journey and look forward to seeing everybody next year, along with all the new members that we all undertook to recruit!!