In His Father’s Footsteps 72 Years Later

Son Plans to Walk Across The Pyrenees Like His Father Did Escaping From Nazi Occupied Europe in 1944. 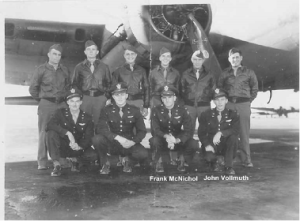 In 1944 Frank McNichol was on active service with the United States Army Air Force (748 Bomb Squadron, 457 Bomb Group) stationed at Glatton Airfield near Huntingdon in East Anglia. Finding the East of England flat, heavily agricultural, and perfectly placed, the US 8th Air Force, ‘The Mighty Eighth’, quickly turned the area into a huge land based aircraft carrier for launching massive daylight raids on targets in Nazi occupied Europe. There were close to 100 USAAF airfields and 100 000 men at the height of the war.

On the morning of the 25th February 1944, McNichol was part of the 10 crew man crew of a B-17 heavy bomber (B17 G 42-31517). It was only his second mission, and he was the navigator charting a course for Augsberg, Gemany. Approaching the target, flying at 20 000 feet, the plane received a direct hit from German anti aircraft fire. One engine caught fire and the plane was unable to stay within the formation of bombers. Isolated and losing altitude the plane was attacked by German fighters. Further damaged, “the ship suddenly made a violent twist, and we prepared to leave.” McNichol’s parachute got caught and he was pushed out of the hatch by John Vollmuth the bomb aimer.  Only three crew managed to exit the plane as it banked steeply: McNichol, Vollmuth and Vito Peragine the engineer/top turret gunner. As they parachuted to the ground they saw the plane, in a spin, crash into the ground on the edge of the village of Mont Saint Martin, near Rheims. The plane, exploded on impact killing the remaining crew. 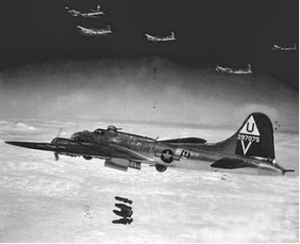 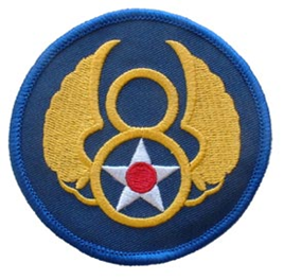 McNichol landed in a wood with his parachute tangled in a tree and he was unable to get it down. This was dangerous because it made it easier for German patrols to locate him but fortunately he was found by sympathetic French locals first – a couple and their young daughter. “They hid me at once, brought me civilian clothes, and then led me to their home. After I had been fed there, two men came and took me to the house where Vollmuth was staying.”

McNichol and Vollmuth remained together as they were moved from safe house to safe house, helped by a series of French men and women risking their lives to help the American airmen evade. Food, shelter, clothing, shoes and false papers were all generously provided. To minimise the risk, each link in the evasion chain operated seperately from the next so if someone was arrested, others in the line were not compromised. Checks were also carried out on escapers and evaders to make sure they were genuine. McNicholl and Vollmuth had their dog tags checked and at one point both had to undergo an interrogation after 2 of the escape and evasion network were arrested and suspicion fell on Vollmuth who could speak some German.

The journey back to England was to take 4 months with McNichol eventually arriving on the 24th June 1944. Over 10 different safe houses were used, the pair sometimes stopping for just a night or in some cases much longer. The longest they stayed anywhere was 6 weeks. Over 50 people were involved passing the airmen ever closer to freedom. From villages near the crash site to Paris and then to Pau before the most hazardous part of the evasion. This was the crossing of the Pyrenees, a mountain chain that seperates France from Spain. To evade from Nazi occupied France into neutral Spain meant crossing the mountains which represented both a physical barrier blocking the way but also a gateway to freedom. McNichol and Vollmuth took three days, travelling at night and resting by day. The guide changed several times and at one rest point they were supplied with new shoes. They met another group also on their way to Spain but did not join together. They crossed over the French/Spanish border on the morning of the 15th May 1944. Once in Spain their troubles were not over as they were almost immediately arrested by Spanish police and put in prison for the night in Isaba. Eventually the pair reached Gibraltar (via Madrid) on the 19th June, arriving in London on 24th June by plane.

This year Joe McNichol, Frank’s son, plans to retrace his father’s route, crossing the French/Spanish border on 15th May just like his father 72 years earlier.

Joe started investigating his father’s wartime service in 2000 while researching his family tree.

“ I joined the Association of my father’s Bombing Group( 457th) and that led to me getting hold of the Escape and Evasion report of my father in 2001.”

Each allied airmen that made a ‘home run’ back to England after being shot down, was debriefed by the Intelligence Service and an Escape and Evasion (E and E) report filed. Reading the report and finding that his father had evaded with John Vollmuth, led Joe to search for him. Joe first made contact with Vollmuth by telephone in 2001.

“Wow, the thrill making that connection with him was very special. We talked for a while over the telephone and he said he had never seen a copy of the E & E report.  I mailed it to him and we eventually made arrangements to meet in 2002.“
Joe spent time in England last year to visit Glatton airfield where his father was based. The site is no longer used by the military but is still an airfield although on a much smaller scale than during WW2.

Parts of two of the three wartime runways have been retained and Glatton now operates as Conington Airport but the Air Force buildings have gone and only the old water tower remains. There are several memorials at the base and another at the nearby church in Connington, but apart from this, little evidence remains that Glatton was once a busy wartime airfield. The village sign in Connington is a reminder of the area’s past. 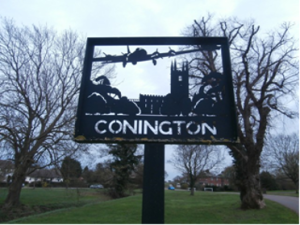 (photo left) The village sign in Connington, the nearest village to Glatton airfield which was where Frank McNichol was based. Source: Paul Williams

Through further internet research Joe obtained a more detailed report of his father’s E and E report. This more detailed, handwritten report included a brief outline of the route over the Pyrenees. From those scant details was born the idea to walk across the Pyrenees like his father had.

Joe contacted Paul Williams at Pyrenees Mountain Adventure, who specialises in treks across the Pyrenees following WW2 escape lines. “Joe asked for help with working out the exact route that his father took. I like the challenge and the detective work involved, studying the maps of the area and the lie of the land. I eventually turned the 1944 route into a 3 day trek that Joe and his wife will complete in May. This is early in the season for trekking in the Pyrenees mountains and we will have snow to cross near the border, the highest point of the trek. This is the exact same conditions that the evasion group had to contend with in 1944. We are also going to spend a night in a shepherd’s shelter with minimal facilities just like Frank and John which will really help us appreciate what it was like for them” says Paul.

Paul adds “It is an honour and a privilege to help relatives walk in the footsteps of their loved ones. Last year I helped a group follow in the footsteps of another American airman called Francis ‘Bud’ Owens. The airmen was attempting to reach neutral Andorra in October 1944. On the approach to the border Owens and 2 companions were caught in a blizzard. They made it into Andorra but died soon after of hypothermia, their bodies being found the following spring.” In the group I helped over the Pyrenees in Owen’s footsteps, there were two of his relatives and also a cameraman shooting footage to make into a documentary. The documentary is in post production at the moment.

The 57 year old Joe McNichol is now retired after 30 years as a Coral Gables Police Officer. Walking across the Pyrenees will be a huge mental and physical challenge. Why do it?

“I want to walk in my father’s footsteps because I never had the opportunity to know him as an adult – he died when I was 7. I want to experience a small part of the challenges that he was confronted with in 1944. I want to have a shared experience with my father that I have not had the opportunity to have like other sons. I also want to pay a small tribute to the incredible courage & sacrifice made by the millions of men & women who selflessly risked everything to defeat the Nazis & Fascism.”

One of the memorials at RAF Glatton is testament to the sacrifice made:

Let us not forget.

The aircrew that did not return from the raid on Augsberg:

Vito Peragine also parachuted from the plane but was captured and spent the rest of the war in a prison camp.

With thanks to Paul Williams for permission to reprint this article

List of WW2 USAF bases in the East of England:  http://mediafiles.thedms.co.uk/Publication/ee-nor/cms/pdf/USAAF%20Airfields%20Guide%20and%20Map.pdf