We were forewarned by Scott Goodall that our Chemin de la Liberté guide Paul Dubons had recce’d our usual route over the Pyrenees and found the last pass over the frontier into Catalunya blocked with snow and ice and too dangerous to attempt to cross. Nor would we be able to reach the Halifax crash site. For the second year running good ole global warming had dumped an unseasonable amount of snow on the Pyrenees to thwart our plans. We would have to climb back down from the Estagnous refuge after the third day and go by bus to Esterri d’Aneau, our final destination. This was huge disappointment for newcomers to Le Chemin, but did not dampen their spirits. Nor those of the usual ELMS Chemin crowd who turned up for the event – Bernard Holvoet, Brid Ni Fhinnagain, Edgar Aromin, Helen Duffee, Jeremy Pearcy, Ray Milford, Charles Wilson, among others. 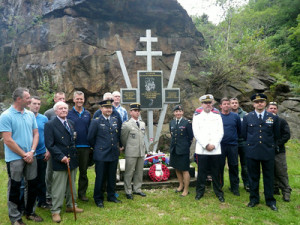 Before we set off, we were entertained by the Chemin de la Liberté Association with a reception at the informative Chemin Museum in the old St Girons Railway station and at a formal ceremony at the site of the old German command post at Kercabanac on the road to Seix. 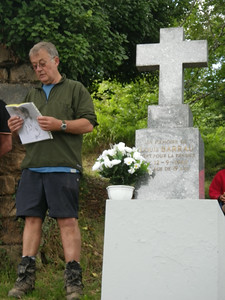 The first day was trying ten hours hard walking though the densely wooded foothills of the Pyrenees, broken by the welcome picnic lunch put on by the Barrau family in honour of Louis Barrau who was gunned down by a German patrol at a shepherds’ hut nearby, where a moving ceremony took place.

The Pyrenean village of Seix provided a night’s rest for the majority on the hard gymnasium floor. The more experienced had earlier booked into the soft beds of the neighbouring Auberge… The following is an extract from my diary which gives a flavour of the rest of the trail:-

Personally I have definitely decided to call the Chemin a day. Ten since 2003 is enough. With my left knee swelling (damaged in 2006 crossing the Creten White Mountains from the Med to the Libyan Sea) it became difficult to put pressure on it to haul myself up the face of the wretched 8,500′ Mt Valier, with the result that I fell way behind on the third 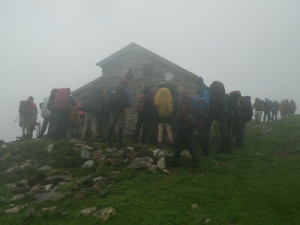 day. It was also pouring with rain, bloody cold with visibility about 50m. Moreover along with others, I had not slept well the night before where we camped just below the snow line. Temperatures dropped to around 4C. Incessant rain hammered into my tent and water “ponded” on the ground sheet by my feet. My sleeping bag soaked up the water like blotting paper and I awoke around 0300 to find myself drenched in freezing water from the waist down. I was already fully clothed in a vain attempt to keep warm. Scrambling down the cliff from the crest of Mt Valier to the refuge at Estagnous was almost as bad. I took a couple of tumbles in the snow but hurt no more than my pride. Even though I put myself straight to bed inside the refuge dorm on arrival, I was shivering for ages with hypothermia. All this in July – no wonder so many perished at other times of the year trying to escape for real.

It’s taken me 10 Pyreneen crossings over 12 years to work out that it is not really a good idea to increase your weight by 20% and upset your balance carrying a 15kg rucksack, then rush up a cold, slippery, icy 8,500′ mountain where the oxygen level is beginning to tail off…News from my insurance company, that they are not renewing my all-risks, world-wide policy in October because I would be 70 next year, also played a part in my decision. For the second year running we again suffered the disappointment of not being able to cross the frontier at the Col de la Claoeure into Catalunya because of excessive snow and ice. However, when we finished the 5 hour walk-out down from Estagnous we were bussed via Vielha around to Esterri d’Aneu for a suburb reception with lots of food and a dancing display by Le Chemin Association members in full Pyreneen costume – you could not buy such an experience. Unfortunately the arrangements made with the Catalan Government and the local Mayors of Esterri and Sort for 100 local walkers to meet us for a ceremony at the 8500′ frontier Col de la Claoeure fell through because of the foul weather, and sadly none turned up at the reception. On the other hand, several big plusses included the presence of George & Janet Duffee – thanks to Helen and Keith’s logistical efforts. 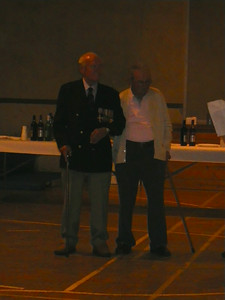 Iconic moments included WWII evader George Duffee shaking hands in Esterri with WWII passeur Paul Broué (both now 91), and George surrounded by a RAF group who coincidentally came from George’s WWII 78 RAF squadron…….. And none of this could have been done without the incredible organisational and logistical efforts of Scott and Judy Goodall in L’Escure.. Good luck for the 2015 Chemin de la Liberté – third time lucky I hope… Geoff Cowling