‘THE CROWS FLIGHT’ –  A NEW TRAIL IN SLOVENIA

Much of the Balkans region is covered with rugged mountains and deep forest. During WW2 the partisan groups took advantage of the terrain to ‘shoot and scoot’ – ambush the enemy and then disappear into the mountains and woods before they could recover. SOE Missions were inserted into the region to work with Partisan groups and to arrange airstrips in remote areas to land Dakotas delivering arms, ammunition, explosives and other stores. They also arranged dropping zones for parachutists. This area was hostile; with high mountains, deep valleys, dense forests and bad weather conditions – wet, deep snow and freezing temperatures. Despite the problems aircrew evaders and army escapers found sanctuary with the Partisans and mountain people, then remained working with them until an SOE Mission was able to co-ordinate their extraction via an empty  Dakota returning to Italy or an overland route to Switzerland.

Our representative in the Balkans, (Slovenia) Eduard Vedernjak, has worked within the framework of the Association ZZB NOB Slovenije (Association of the Combatants for the preservation of the values of the National Liberation Struggle of Slovenija) which was founded in 1948. ‘The Crows Flight’ trail is dedicated to Ralph Churches’ and Les Laws’ group of escapers, and to honour the memory of the partisans, couriers and safe-house keepers and farmers, many of whom died in the struggle.

The Trail includes safe-house towns and villages along the route for commemorative events. The complete escape route is nearly 200 miles long over high, rugged, mountainous terrain [with a river to cross!] and takes approximately 11 days, although a very fit team have recently completed it in 9 – however, there is also the option to tackle the route in stages. The route starts at the former Stalag XVIIID POW Camp at Maribor, where the first breakout took place and finishes at the SOE/Partisan landing strip for RAF Dakotas at Otok, from where the escapers were ferried to Bari in Italy. The event usually takes place at the end of September each year; flights and guides are in place and accommodation is available each night. There will be local participants too.

No doubt it is too late for walkers to make arrangements to join the Trail this year, but it would be good to have an ELMS Team tackle it next year. If you are interested please contact us at ELMS.

A second trail is also available which follows the route of 79 British POWs who escaped from Italian camps after 08 September ‘43. Led by partisan Frank Miklavčič,  the group walked through occupied Yogoslavia and finally reached the small port of Senj. From there they travelled by sea to southern Italy.

The following information has been sent to us by Eduard Vedernjak who is now our representative in the area. Working with the Association ZZBNOB Slovenija and local people, Eduard created the routes and has been involved in running the event.

The International Memorial Trail of Alliance and the Commemorative Events in Ožbalt, Gornji Grad,  Spodnja Slivna – Geoss and Otok. 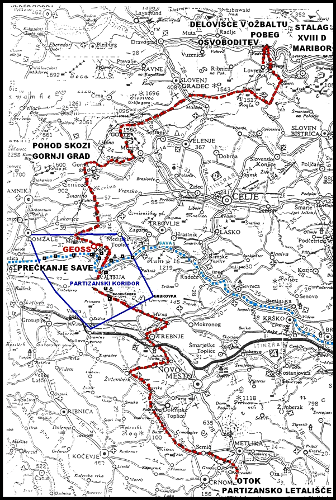 The map copy is from Ralph Churches’ book. Additional graphics by Eduard

“The Crow’s Flight” is a project dedicated to remembering and raising awareness of the liberation of Ralph Churches’ and Les Laws, POWs, and the rescue of hundreds of other Allied POWs and over 800 airmen evaders of different nationalities. At the same time we honour the memory of the heroism of Slovene partisans and partisan couriers as well as those of the local farmers, many of whom sacrificed not only their homes but also their lives.

The basis of this project are the memoirs of the Australian POW Ralph F. Churches and his escape Camp STALAG XVIII D in Maribor: “A Hundred Miles in distance as the Crow Flies” to the extraction point airstrip at Otok. Partisan records were also used.

Ralph Churches is the soldier wearing the Australian ‘Slouch’ hat. Les Laws is the man behind him

30 August 1944   Seven British POWs, including the two organisers, Ralph Churches and Les Laws, escaped from the railway work site 490m above the HP station at Ožbalt with the help of a Partisan guide reached the village of  Lovrenč  na Pohorju.

31 August 1944  Partisan fighters of “Ljubo Šerčer ” Brigade liberated 80 British POWs from the same camp worksite at Ožbalt. The rescue mission was carried out by about 100 fighters of the  Serčer Brigade together with the seven British POWs. They fled to the peak of “Klopni Vrh”, where they were joined by 9 more British and 10 French POWs, who worked on various farms near Pohorje.

6 September 1944 Enlarged group of 103 POWs, among them 10 French, marched into village of Gornji Grad

09 September 1944 Partisans led Churches’ POWs to the village of Spodnja Slivna, next to Geoss, and they handed them over to the Partisan Detachment “Kamniško-Zasavski odred”.  The Partisans of the Kamnik-Zasavski odred, with local farmers, successfully organised the crossing of the road, crossing of the River Sava by boats, and the railroad in the area of the so called ‘partisan corridor’ in Zgornji Hotic.  All took place with the support of the local population.

18 September 1944 103 POWs were extracted by allied RAF air crews with Dakota DC-3 aircraft from Otok to Allied base at Bari, Italy.

This Trail is dedicated to the escape and liberation of the 87 British prisoners of war (POWs) from the STALAG XVIII D camp in Maribor. This was a unique event in the history of WWII, due to the large number of rescued Allied soldiers. The escape was organised by POWs Ralph F. Churches from Australia and Les Laws from England.

The “Partisan corridor” in the area of Litija was the only location, where crossing the river Sava was possible. Despite numerous enemy strongholds, the ferrymen – fighters with assistance of the local population helped more than 7,000 mobilized recruits to cross the Sava from Štajerska to Dolenjska. Among them were fleeing allied POWs, rescued airmen and members of allied SOE missions.

Taking off at the partisan airfield Otok next to Metlika, the Allied pilots saved hundreds of wounded partisans, over 2,000 women and children, elderly people, hundreds of escaped allied POWs and 806 rescued evading allied airmen by flying them to Bari, Italy.