On Saturday 2nd April ELMS members and their friends and colleagues gathered at the National Memorial Arboretum near Alrewas to unveil two memorials to commemorate very different events.  The National Memorial Arboretum is currently undergoing a major ‘facelift’ including the building of a new Remembrance Centre, and refurbishment of the Armed Forces Memorial.  However it is fully open to all visitors and the ongoing work does not in any way detract from the attraction of the grounds and the increasing number and variety of the memorials erected.

The weather as we arrived was, to put it mildly, wet!  As people gathered in the café at the main building I am sure we all had visions of standing out in the pouring rain, in what is, let’s face it, a pretty open and often windswept piece of England!  However, as the morning wore on the clouds lifted and much to everyone’s relief the rain stopped and a glimmer of sunlight began to appear through the clouds.

We all gathered at the Special Forces Grove which is administered by Mike Colton and his group of helpers, and huge credit must go to them for the quite stunning development that has taken place.  The grove contains many memorials to both individuals and organisations that could be described as belonging to ‘Special Forces’ such as members of the former F Section SOE, Popski’s Private Army and the Reconnaissance Corps.  The grove continues to develop and they are currently fundraising in order to erect a memorial to those who took part in the Pegasus Bridge Operation on the night of 5th/6th June 1944. 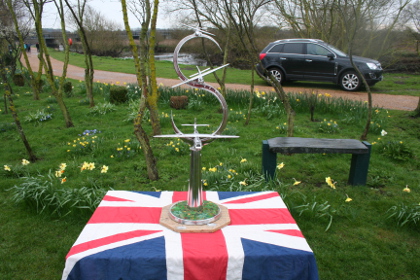 The picture shows the design at one fifth scale and the final monument will, it is hoped, be about five metres high.  If you would like to make a donation towards this particular memorial then you can do so via the Special Forces Grove website.

As people gathered at the grove and met up with old friends they were greeted by music played by the Sheffield Pipe Band. 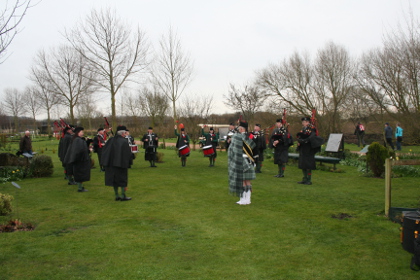 Mike Colton welcomed everyone, including the Director of the Arboretum Sarah Montgomery, who had joined us for the occasion, along with Colonel Daesco Park and colleagues from  the Embassy of South Korea and Major David Damron from the USAF Team at Mildenhall.  We were also joined by members of the Royal Regiment of Fusiliers who had been part of the UK infantry deployment in Korea.

We had gathered for the unveiling of two very different memorials.  The first was to Gabrielle Petit, whose biography appears in full elsewhere, but in short worked for the British SIS during WW1 and helped allied servicemen regain their own lines.  She was eventually betrayed, captured by the Germans and summarily executed in April 1916. 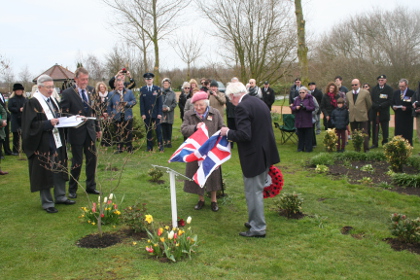 The group then moved to the second location for the unveiling of a memorial to all those who were part of the UN Partisan Forces during the Korean War. 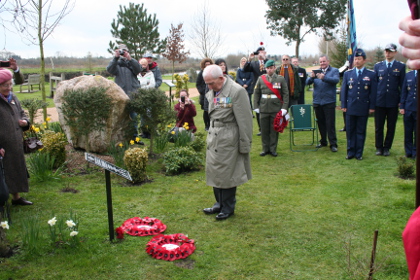 This included our own Major David Sharpe BEM, one of the few to have been taken prisoner, and who, despite making three attempts to escape but being recaptured each time did survive his appalling treatment at the hands of his North Korean captors.

Not so lucky was Lieutenant Adams-Acton, who was a POW with David Sharpe but was executed by his captors following his third escape attempt. 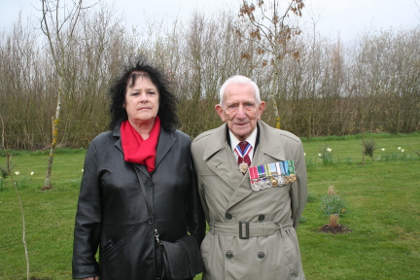 We were delighted to welcome Monica Adams-Acton, a relative of his, to the ceremony.  The UK files on the activity of this group remain classified, although some information is available from US sources on the activities of The United Nations Partisan Infantry Korea (UNPIK), also known as the White Tigers.  The unit was consolidated under the control of Eighth United States Army, Korea’s 8th Army G-3 Miscellaneous Group, 8086th and 8240th Army Unit. The details of the undercover operation were made public by the US Army in 1990. The unit worked deep inside North Korea to gather intelligence, conduct raids and sabotage, rescue POWs, recruit and lead guerrilla armies and create confusion in the enemy’s rear. 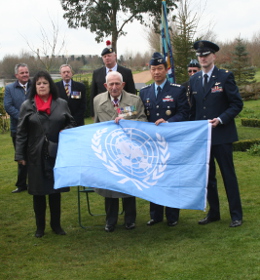